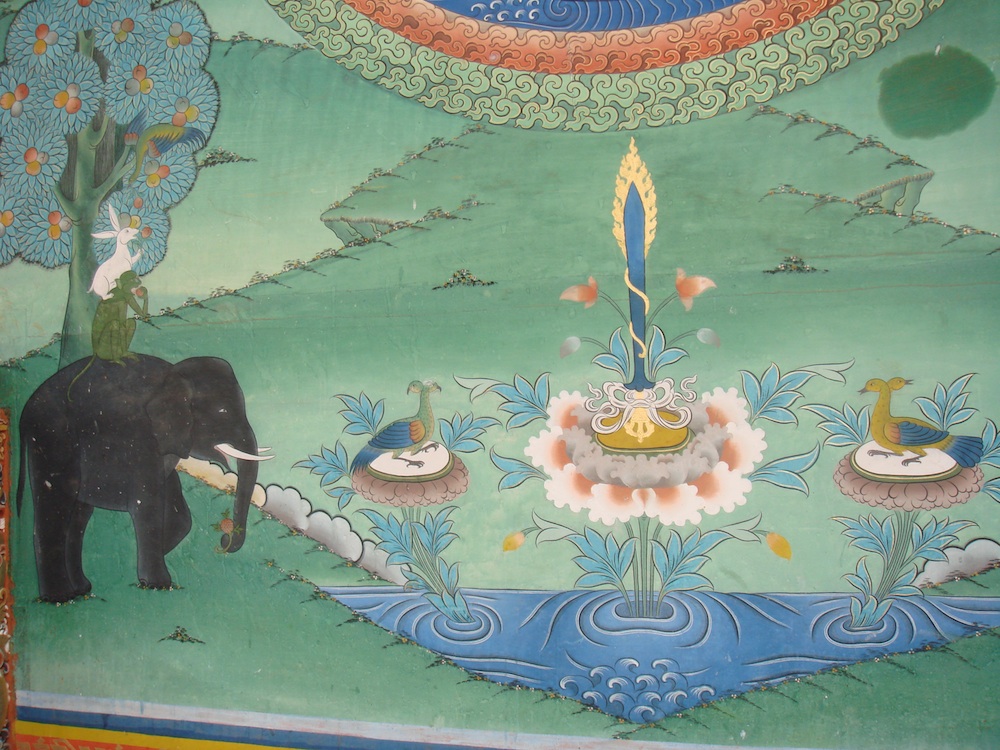 The Story of the Four Animal Friends

The King of this area was very curious because areas surrounding his province were having a lot of problems. There were problems such as drought, famine, and fighting in the areas surrounding the King’s province.  The King was really surprised that his province was so peaceful and everything was going so easily. The King went to see astrologers to find the reason why his province was so peaceful. The astrologers found that all these good things in the province were because of four animal friends that were living upstream from Sumalti province.  The good fortune was not due to the power of the King or any of the people but was due to these four animals.

One day, the four animals came together to talk about who is more wise and older. There was a big banyan tree where the animals were living. The elephant said that he could remember when the tree was his height.  The monkey said to the elephant that he must be older because he could remember when the tree was so small that he could hop over the tree. The rabbit said that he must be older than both of them because he gave the tree manure when the tree was just sprouting up from the ground. The bird said to all of them that he was much wiser and older because he was the one who brought the seed from a different place.

The size and the strength of the bird is small and the size and the strength of the elephant is very big and powerful. The animals were each different but they respected each other. The animals found that the bird was the oldest and the wisest. The rabbit was the next oldest and wisest, followed by the monkey with the elephant being the youngest.  The bird, the pheasant, taught the other animals moral conduct. Each of the animals followed the advice of the bird and this helped to increase happiness all around the area.

This story is recorded in the Sutra called, the Vinayavastu (Foundation of Discipline).  In the Vinaya teaching Dulwa Lung and the discourse Do De Na Kyang Lung it is written that these four animal friends were the Buddha himself and his three attendants. Kuengao (Ananda), Sharibhu (Shariputra), and Mougyelghibhu (Maudalyayana) were the three attendants. The bird, the Pheasant, was Buddha, the rabbit was Ananda, the monkey was Shariputra and the elephant was Maudgalyayana.