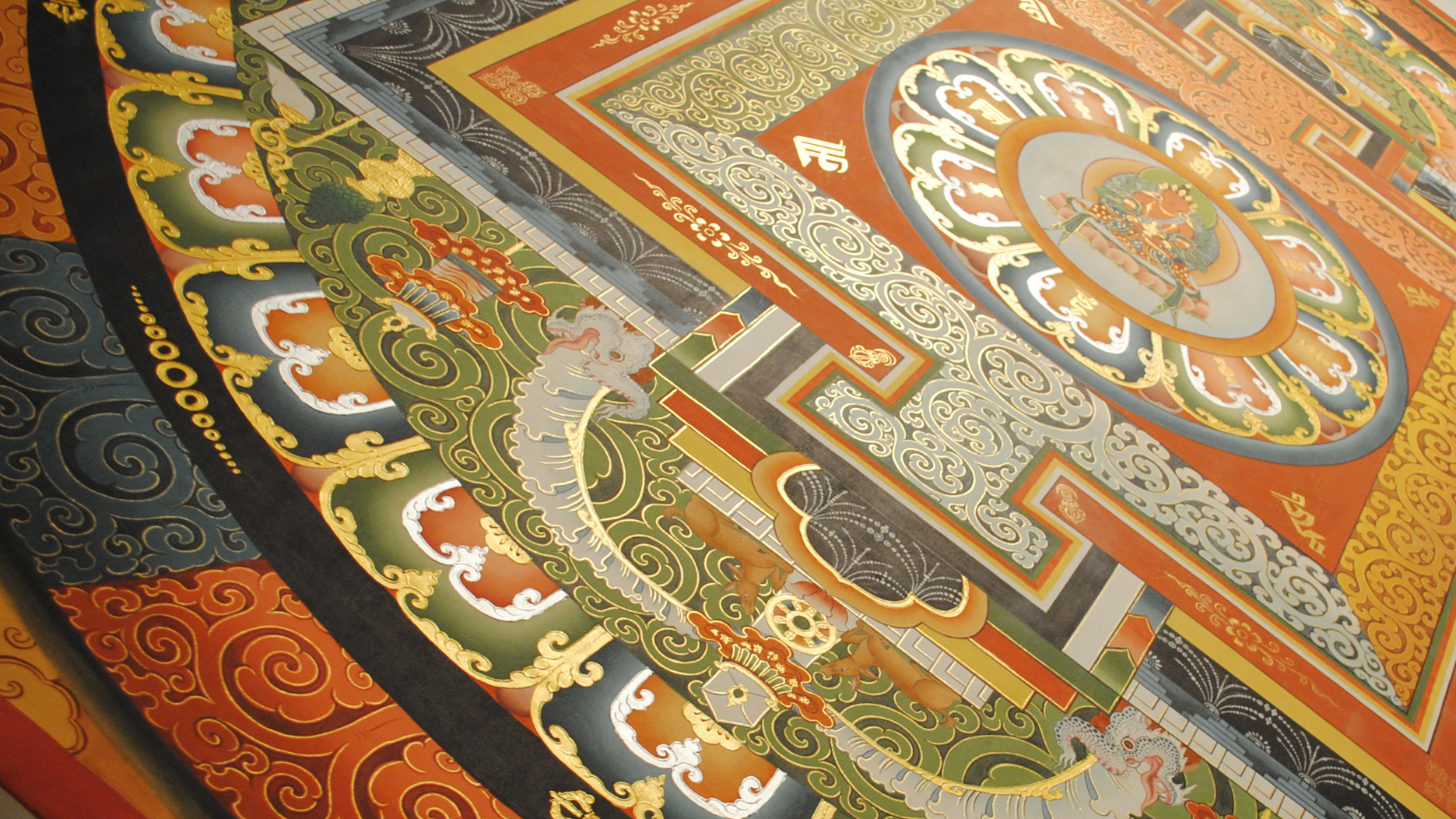 The Mandala: The Sacred Geometry of Meditation

A mandala is a visual symbol often utilized in meditation practices and teachings. The mandala symbol itself is a geometric construction of geometric points, lines, planes and solids which symbolizes our universe. These geometric symbols can be used as a visual meditation tool, called a yantra. Other designs can similarly be used as meditation tools, but may not be mandalas by definition. 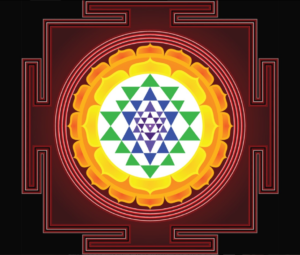 Mandalas and all other yantras work as visual meditation points of concentration. Pictured (top) is the sri yantra: sri meaning‘king’ or ‘most important’. Ancient yogis of India and Tibet considered it to be the most powerful of all geometric symbols, representing the geometric structure of the sound of creation — the Om.

Conversely, a mantra is the audio version of the mandala; an aural meditation tool. Whether the sound of the mantra is a single syllable tone, such as the Om, or a series of metaphysical musings, such as the ancient Gayatri Mantra, mantras are wavy linear expressions of universal connection, voiced as concentrated sound vibrations.

Meditation tools also extend far beyond the visual and aural; the terms asana and mudra both refer to physical positionings used as meditation tools. An asana is a body posture (such as those used in the practice of yoga) and a mudra is a hand gesture or posture. Asanas and mudras enable our own bodies to become a geometric representation of meditation. The postures transform the physical self into one’s own geometric figure or plane, both among the space and sensitive to the space of self and its surroundings.

Bringing these concepts and tools together is tantra. Tantra is integration; the integration of yantra (visual), mantra (sound) and mudra (positioning), each of which is an important, intertwined aspect of yoga, and life itself. Essentially tantra is the spiritual understanding of the relationship and connections between individual and universal energies. An ancient spiritual philosophy preceding both Buddhism and Hinduism, tantra signifies confluence and integration — a fusion— and refers to the unification or weaving together of principles and practices, instructions and individual actions. It unifies the macrocosm with the microcosm, the universal and the individual, the feminine and the masculine, the yin and the yang. It also refers to integrative knowledge and its continuation and refinement, through the interaction of teacher and student, and the acceptance, integration and transmutation of knowledge between individuals — like the string of life.

Etymologically, the word tantra is Sanskrit for loom, the device that weaves together string into cloth. It is an ancient word with many properties and has been variously used to describe the knots of strings weaved together in a rug, the cord on which sacred mala beads are strung, (mala beads are Tibetan prayer necklaces of 108 beads, which are used to assist with the mental or vocal repetition of a mantra 108 times — a number of great spiritual significance) and more broadly, to describe practices that unify the individual with the universal. Although the word tantra is often used in reference to the union of sacred lovemaking, the concept is not necessarily limited to the act of lovemaking. In fact, humanity itself is a tantra; a fused weaving knot or many strings, of many instructions and many individuals.

Unifying meditative principles and practices potentiates the power of tantra, yantra, mantra and asana. This is further enhanced by the incorporation of Yin Yang tantra. The combination of the Yin and Yang potentials and energies within leads to all sorts of aspects of personal development. This can be energetically understood in the idea that there are only two types of energies, straight and circular — straight for Yang potentials and circular for Yin potentials. It can be understood on a tangible level that rest and work are both required. When straight and circular energies combine, a spiral results. A spiral is one of, if not the, highest expressions of life energy.

There is not necessarily the need for a specific yantra, or specific mantra, or specific asana in the practice of meditation, however each are tools that can be used and considered, and are most powerful when practiced in a unified tantric manner, or tantric mind state. A tantric mind state recognizes unity expansion and aims toward it, rather than cultivating a mind state of separation. Essentially, using yantras, mantras and asanas as meditation tools helps to establish your sacred space and to unite with entirety in tantric balance.

No matter how one approaches meditation, the unifying tantra of meditation principles and practices bring about the unified expansion from the central source, as symbolized by the mandala yantra (the visual). No matter our level of refinement of posture, we are always in an asana, whether or not we also utilize mantra or yantra. For most of us, we still see and hear, and those who cannot can still concentrate and connect. And no matter the mantra, yantra or asana we utilize, it is the principles and energy behind (and pertaining to) their symbolism that contains the real spiritual power — the highest potential for tantric connection, which is inherently within us all.

The Geometry of Energy: How to Meditate

In his book ‘The Geometry of Energy: How to Meditate’, author Ethan Indigo Smith explores meditation and meditative energies through the sacred dimensions of geometry. Simple and profound, it is an empowering four-step meditation designed to lead to individuation, self-development, and an enhanced understanding of energy and vibration. Useful to meditation newcomers and longtime practitioners alike, ‘The Geometry of Energy’ provides insights into a variety of meditative processes for psychological and spiritual cleansing and enhancement.